The EAL Journal blog publishes plain language summaries of EAL-related Masters and Doctoral research.  In this post Faidra Faitaki, doctoral researcher at the University of Oxford, presents a summary of her MSc research into cross-linguistic influence in Greek children attending English medium pre-schools.

Background: Why I did this study

School systems around the world are lowering the age at which children begin to learn a second language. National curricula often now include foreign language learning in pre-school, when once they waited until children were in primary or secondary school. In countries where pre-school curricula do not (yet) include foreign language learning, parents often decide to send their young children to learn a second language privately. This is common in Greece. In government schools English is not taught until children are between 6 and 8 years old. But, many Greek children already speak some English by this age because they have attended private pre-schools. Private pre-schools often operate a submersion model of English language education. This is an approach in which activities are carried out entirely in English, with little or no direct language teaching. Children, who attend these pre-schools from around the age of 3, are expected to ‘pick up’ the language. Yet our knowledge of the process involved in Greek pre-schoolers’ ‘picking up’ of English is rather limited.

Athens, where the study took place

As the topic of language acquisition is broad, I decided to focus on a specific type of word: pronouns (I, he, she, they etc.). Pronouns are small but extremely important words; without them, it can be impossible to make sense of a sentence. Consider the sentence ‘Want ice-cream’. As the pronoun is missing, we cannot tell who wants ice-cream. Omitting the pronoun in English is incorrect. However, there are languages where pronoun-less sentences are normal. In Greek, instead of needing a special pronoun word, the ending of the verb changes according to who the subject of the sentence is. So, a Greek speaker would say ‘thelo pagoto’ for ‘I want ice-cream’, ‘thelis pagoto’ for ‘you want ice-cream’ and ‘theli pagoto’ for ‘he/she/it wants ice-cream’. Indeed, Greek speakers only use pronouns in special cases, like adding emphasis or changing the topic of conversation. Despite never being explicitly told, both English and Greek children understand these rules in their own languages, and tend to use pronouns correctly, by the age of 3.

Given this difference between Greek and English, I was interested in investigating whether Greek children who had ‘picked up’ English in submersion preschools get confused about pronoun use in either or both of their languages. Studies have shown that children who learn Greek and English from birth tend to use more pronouns in Greek than Greek monolingual speakers, making them sound strange to the monolingual Greek ear. Conversely, Greek adults who learn English, use fewer pronouns when they speak English compared to English monolingual speakers. When the patterns of one language are used in another we call it cross-linguistic influence. I wanted to see whether Greek children in English language pre-schools showed evidence of cross-linguistic influence in their use of pronouns, and whether there would be a difference in pronoun use between younger and older children.

I compared the use of pronouns in three groups of children: Greek monolinguals, English monolinguals, and Greek children who were learning English at pre-school (bilinguals). Seventy-six children aged between 3.5 and 5.5 years, divided equally into two age groups: ‘younger’ (3.5 – 4.5 years) and ‘older’ (4.5 – 5.5 years) participated in the study. 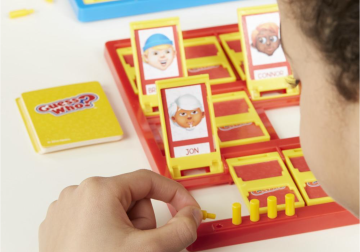 Guess Who? provided the stimulus for the analysis of pronoun use

To measure their use of pronouns, I created an activity, based on the game ‘Guess Who?’ which I played with the children. We each had identical sets of cards depicting cartoon-like faces. There was a third (identical) stack of cards next to us. We each picked a card from the stack and hid it. Then, we had to ask and answer questions to identify which face was on each other’s hidden card. The task required that children made correct use of pronouns in each language. For example, they needed to say things like “Is she wearing a hat?” in English, and “Foraei kapelo?” in Greek. I played this game once each with the monolingual children and twice with the children in the bilingual group, once in each language. I recorded their speech then analysed it for pronoun use.

The three groups of children were somewhat different in their use of pronouns during the language game. Children in the bilingual group tended not to use pronouns in Greek, much like the Greek monolinguals. Older bilinguals used even fewer pronouns than their younger counterparts, in accord with the rules of the Greek language. In English, younger bilinguals tended to use fewer pronouns in English than English monolinguals. In other words, they sometimes incorrectly omitted the pronoun, such as ‘wear a hat?’ and ‘yes, has red hair’ (instead of ‘does he wear a hat?’ and ‘yes, he has red hair’). Older bilinguals tended to use more pronouns than their younger counterparts when they spoke English, more similar to English monolinguals.

These results suggest that the bilingual group’s English is sometimes influenced by their Greek (rather than vice versa), but that the influence goes away as they get older and become more proficient in English. The fact that bilingual children’s languages may influence each other during development is highlighted in many language acquisition studies. Yet, this influence does not impede children’s development. Indeed, the English-Greek bilingual children I tested did not seem to be confused by learning a second language. Although younger children made some mistakes in English, older children managed to correct themselves. Thus, the findings of this study can serve as a reassuring reminder that, sometimes, bilingual children can pick up the rules of their second language if they are exposed to it for a continuous and sufficient period of time, without teachers having to teach it explicitly. In my PhD research, I aim to investigate this context further, focusing on more and more complex types of words. I believe that this way, we can further and deepen our understanding of what the role of cross-linguistic influence is, and of language teaching in pre-schoolers’ bilingual language development.

Faidra is a DPhil student in the Department of Education, University of Oxford. She is supervised by Professors Victoria Murphy and Kate Nation, and funded by the ESRC. Her MSc dissertation ‘The development of subject pronouns in Greek children learning English as a foreign language at pre-primary school’ is available via the Bodleian Library here.