Regional Interest Groups (RIGs) are NALDIC’s way of engaging directly with local teaching and learning communities up and down the country. Dianne Excell, national RIGs coordinator, reports on what our flourishing network of RIGs has been up to recently.

The NALDIC RIGs continue to flourish and throughout the summer term they welcomed many new practitioners at their meetings. Sadly, we have not yet managed to recruit new convenors for the South London and South Wales RIGs but ten of the well established RIGs held meetings and a new RIG for Cumbria and Lancashire held its inaugural meeting in June. We thank Catharine Driver and Oksana Afitska for offering to convene a RIG in a region not previously supported. As a consequence, NALDIC’s North West RIG will be renamed ‘Greater Manchester RIG in the autumn term. This post will highlight some exciting contributions from the summer term.

Assessment of new to English pupils continued to be on the agenda of several RIGs. In North London and the West Midlands, colleagues used the Bell Assessment Framework to make judgements on several samples of EAL pupils’ writing and spoken language.  In the East Midlands, colleagues from Nottingham, Derby and Leicester examined several assessment frameworks. In Berkshire and Hampshire and Cumbria and Lancashire, the focus was on Assessment of SEN/EAL and Dyslexia.

Depletion of Local Authority support continues to be an issue. Colleagues reported that EAL support was being reduced in Blackburn and Darwen but continued in Lancashire and Durham local authorities.

Support for Refugees and Asylum seekers was the main theme in The North East RIG where common negative press releases were examined as well as the reality of the challenges the children and their families face when entering the UK.  Schools and Counties of Sanctuary were also explained. Several other RIGs touched on this topic too. The pictured banner, based on the four seasons, was made by primary Syrian refugee children in Malton, North Yorkshire.

The South West RIG reported on the Syrian breakfast which was the culminating celebration of International Refugee week at Pittville School, Cheltenham, where the Guests of Honour were the refugees and their families. 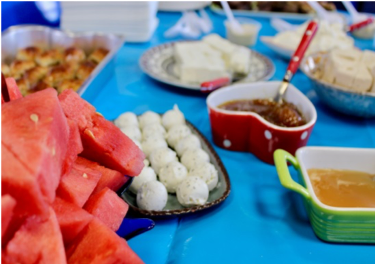 The newly inaugurated Cumbria and Lancashire RIG benefited from being on the same day as a CLIL symposium. Participants provided an insight into EAL teaching in Wales, the one year language course for migrants in Finland and the language teacher training in Austria where there are increasing numbers of German and Italian second language learners in the schools.

The Oxford RIG broke with tradition and showed the documentary film Talking Black America followed by a discussion on language, legacy and identity and the varieties of English used among African slaves in the south eastern states.

Continuing the theme of challenges for EAL learners in the classroom, the Yorkshire and the Humber RIG focused on Writing Challenges, looking at earlier research by Lynn Cameron. A colleague who had experienced these challenges as a new arrival from Pakistan explained what she felt were the most important  strategies to help such EAL writers  to overcome them, whilst another colleague used three different contexts to illustrate techniques for developing writing to raise achievement.

A presentation in the West Midlands highlighted how involvement in international e-Twinning and Erasmus projects was having an important impact on how well pupil are integrated into school life. 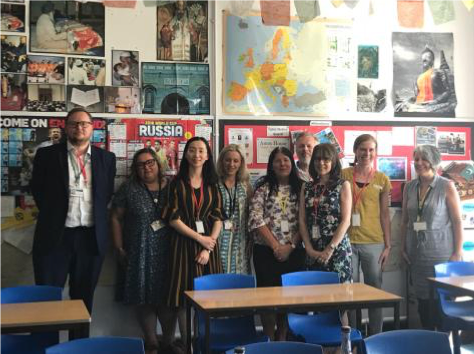 Other topics covered in the summer term were: Science and EAL; Independent Schools; ESOL for Mums and babies; policy and practice – the mismatch between intentions and enactment.

One especially valuable aspect of RIGs is the opportunity to network and discuss issues that some colleagues find difficult or need support with. Topics last term included: how to get vocational studies teachers to embed English alongside their course content at Level 2 and difficulties in finding strategies to support a Chinese student in a school where no other students speak Chinese and whose parent insists that the student  should use English at home. Colleagues shared ideas for support and a colleague at a nearby secondary school offered to find students with the same L1 to help build the child’s confidence.

Our network of special interest groups is growing steadily. The first four are still in their infancy, but each provides a forum for discussion and sharing expertise in specific sectors.

The group has not been very active so far this term but the next discussion will be about supporting the needs of international students in the September intake. Before the summer break there were 36 members of the Facebook group who discussed policy and how to ensure that late arrivals achieve a good GCSE grades in English Language which will enable them to progress to A level courses and eventually university.

A call was put out on BAALmail (run by the British Association for Applied Linguists) and the support from the Applied Linguistics community was overwhelming. Currently there are discussions about creating a joint SIG.

NALDIC SIG for the British Islands

Sarah Moodie in Rouge Bouillon Primary School, St. Helier, Jersey, has been exploring the possibility of facilitating this group and colleagues for Guernsey and the Isle of Man were invited to some EAL training at her school on 25th June.

The Facebook group set up for this SIG had about 23  members by the end of the summer term. Visit: facebook.com/groups/NALDICintSIG.

Many practitioners who have shared their research and good practice at RIGs around the country will be delivering workshops at the NALDIC Conference in Leeds on November 17th. You don’t have to be a NALDIC member to take part in a RIG or a SIG but do join us at the RIG nearest you and be prepared to be inspired!

N.B. If you feel that you could convene a termly RIG meeting for EAL practitioners  and their EAL students in South London and South Wales, please contact Dianne Excell. After all the great work already done by Anita Conradi and Hala Edwards it would be a shame  to see these RIGs disappear. CAN YOU HELP?