Mallory Henson is Principal Educational Psychologist in Milton Keynes Educational Psychology Service, and Chelsea Moore is a Psychology Assistant in the same team. They have recently been involved in re-launching their ‘Language Intervention Programme’ (LIPs) which aims to extend children’s vocabulary through exploring the meanings and sounds of new words.  In this plain language summary Chelsea and Mallory describe how they evaluated the LIPs programme and the response to it by teachers and students. 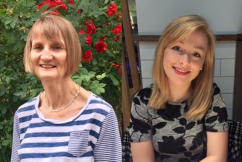 Why did we do the research?

Language is a key aspect of children’s development and impacts on their future attainments in school and their relationships throughout life.  The aim of the LIPs is to enhance children’s language development through a targeted intervention based on simple enrichment activities.  It is designed to build children’s vocabulary, providing structured practice in speaking and listening.

In 2001, the head teacher of a local primary school expressed concerns about the socialisation of children entering the reception class, many of whom had had limited experience of being in an early years’ setting.  The teacher and educational psychologist made observations in the playground and classroom which confirmed that that there was a low level of verbal interaction between the children.  Many struggled to share and to take turns, and they tended to be physical in their approaches to each other.  A number of pupils had delayed language and play skills, and a few were very shy and reluctant to communicate in spoken language.  Some of the children in the group were second language learners and had little or no spoken English.  After discussion, it was agreed that a group of children would benefit from structured language enrichment activities and the teacher and educational psychologist subsequently worked together to devise a suitable group intervention.

The programme and screening assessment developed was kept short and simple to run, to make it workable in a busy school. We decided to use readily available books to stimulate discussion such as the Oxford Reading Tree wordless stories.

After the programme had been trialled over a three year period, it was subsequently shared with other schools across Milton Keynes and it was used successfully for several years.  In 2017, the materials were revisited and it was decided to explore whether there was still a need for such an intervention and if so to revise the screening assessment and programme.  The materials were trialled with groups of children in Foundation 2 (Reception) classes.

What did we do?

Improvements were made to the screening tool in the selection of pictures, reflecting changes in technology and improving the clarity of images.  Three schools volunteered to test the amended assessment. This was administered alongside the British Ability Scales (BAS3) Naming Vocabulary subtest, a standardised measure used by educational psychologists, to establish validity by looking at how well the scores correlated.

Roll out of the programme

Number of EAL and SEN pupils in LIPs evaluations

Next the schools ran the programme which was based around structured book sharing activities.  Sessions of 15-20 minutes were run twice a week for 8 weeks. Finally, the screener was repeated on the children who took part and data was collected and analysed. Qualitative feedback was also sought from teaching staff running the programme.

What did we find?

Responses from teachers and teaching assistants indicated that that staff appreciated having a simple structured intervention to boost children’s language attainment.

‘Very pleased with the progress the children have made. They have all developed in their communication and language as well as their vocabulary’.

‘The intervention is quite simple and easy to follow. Session 1 and session 2 worked well and children and also helped each other. Session 3 (role play) children needed lots of support; however they really enjoyed the activity. Children really enjoyed the sessions and were able to engage in them’.

‘Each week the children were eager to participate and share what they remembered from previous sessions.  Most of the children who were involved in the group had limited English but now have a much bigger vocabulary that they are using daily. I am really pleased with the results and watching those children grow in confidence has helped my team to see how valuable this programme has been for these children’.

Results showed that the LIPs assessment had a high positive correlation with the BAS3 Naming Vocabulary subtest, which suggests that it is a valid measure of expressive vocabulary.  However, it should be noted that the tool measures a single aspect of language expression, vocabulary, and would need to be considered in the context of other observations and assessments if a fuller picture of a pupil’s language development is required.

Statistical analysis of data collected at the end of the programme indicated that participating in the Language Intervention Programme as a targeted intervention improves expressive language in reception children.  On average pupils improved their receptive vocabulary by over 12 months. However, some caution should be exercised as the evaluation did not employ a comparison (control) group, so would be difficult to conclude that the improvement in scores was due to the intervention or is the result of other learning experiences.

What does it mean?

Although we’ve only been able to give a flavour of contents of the programme here, the action research project suggests that participating in the LIPs improves children’s expressive vocabulary, including for second language learners. More importantly it suggests that proactive strategies at the start of the first term in school could give children a kick start, particularly those who have not experienced an English language rich environment.  However, further research is needed to consider whether the benefits of participating impact on children’s socialisation, including improving their ability to turn take and share with their peers. It is also important to include a comparison (control) group in future evaluations of this intervention.

For more information or to purchase the programme please contact the Milton Keynes Educational Psychology Service at education.psychology@milton-keynes.gov.uk