The second in our week of research posts is a report from London. On Monday night, the UCL Centre for Applied Linguistics hosted a round-table discussion on ‘New Speakers’ of languages – a term that captures the complex of issues around migration, language learning and community. There was much relevant discussion for EAL practitioners, especially as it challenged a lot of the terms we take for granted in our work.

This idea, that our assumptions about the boundaries of ‘languages’ need careful rethinking and that this could revolutionise our work as teachers and researchers, animated much of the discussion on Monday night, at a round-table discussion about ‘New Speakers’. It brought together five leading academics to give different perspectives on what it means to be a ‘new’ speaker of a language.

Bernie O’Rourke began the discussion, giving an overview of the concept of ‘new speakers’ with a focus on minority-language contexts (such as becoming a new speaker of Welsh, Irish or Catalan – see O’Rourke & Pujolar, in press). She argued that it was a difficult concept because of the tensions between different varieties of languages. New speakers are often (or often become) literate in the standard variety of the new language, rather than the local varieties used in a particular community. This complicated notions of ‘authenticity’ and ‘expertise’, shifting the emphasis away from a contrast between ‘native’ speakers and ‘new’ speakers. If the ‘new’ speaker has greater command of the standard variety of a language, and the ‘native’ speaker of the local variety, then the normal hierarchies of prestige and expertise  can shift. The fundamental opposition between native and non-native speakers, she argued, is one of power.

The idea of ‘new speakers’ should be seen as a lens, rather than a category. This made a lot of sense in the context of EAL, where the education system often categorises young people according to their (perceived) competence in English, rather than using it as a starting point to learn more about their languages, histories and capabilities.

“The fundamental opposition between native and non-native speakers is one of power.”

Li Wei spoke next, describing how the languages we speak are used as a membership category (such as an ‘English speaker’). This has strong overtones of morality and social order; it is linked to our understanding of belonging, authenticity and cultural norms. The questions we need to ask are often about entitlement: who’s entitled to each language and who can decide what counts as correct. This has a strong connection with nationality and race because we often make assumptions about who is entitled to use a language (or who is ‘native’, or ‘authentic’) based on their membership of nationality or race categories. In other words, that English people from England speak English; but this doesn’t allow for the ‘realities of the 21st century’: the complexity of people’s mobility and the broad repertoires of language resources that result. Li Wei went on to argue that the invention of the nation state led to the ‘invented ideology’ of monolingualism. 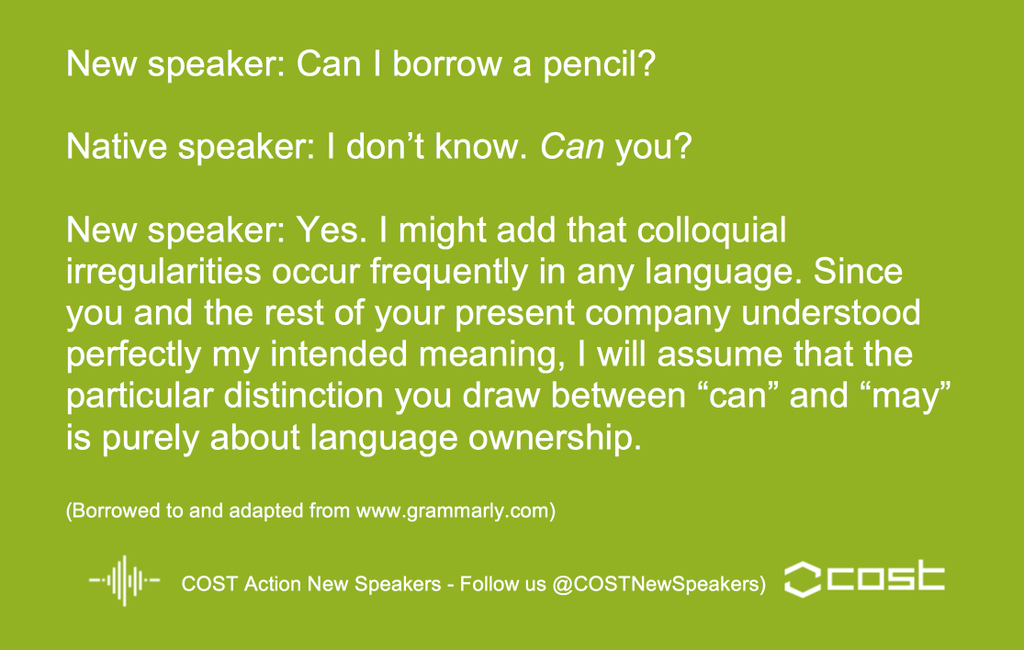 He argued that the notion of translanguaging (that our languages resources are stored in a single ‘repertoire’, rather than as separate ‘languages’, and that communicating is a process of deploying those resources for communicative effect, rather than just ‘using’ or ‘speaking’ a single language’ – for more see García and Li Wei 2014) complicated these assumptions. Instead, it allowed for ‘ownership’ of / access to multiple languages, all held together by the idea of ‘repertoire’ (a single store of all a person’s language resources). He suggested that we are all ‘new’ speakers because we move between different registers and varieties, even within a single language.

Jean-Marc Dewaele spoke next, picking up on Bernadette O’Rourke’s comment that ‘New Speaker’ should be used as a lens, rather than as a category. We must ‘resist the urge to categorise’; it’s a very human urge, but it can prevent us from seeing how people really use their language resources. He cited Viv Cook‘s work on ‘multicompetence‘ (which sees people’s language resources as one connected system, rather than as separate languages) and asked whether ‘it is fair then to talk about a bilingual who is weaker in language A or language B?’ Like Cook, Jean-Marc preferred the term ‘language user’ to ‘speaker’ as it in more inclusive and recognises a wider range of activities and modes than just oral performance. He closed by arguing that ‘new speaker’ was a particular type of category – ’emic’ (or defined by insiders), rather than ‘etic’ (defined by outsiders). This has important – and perhaps provocative – implications for EAL: that it’s not the teachers or the education system who can best define who counts as EAL, but the young multilinguals themselves.

Mike Baynham began by talking language learning as a life-long endeavour. He described, half-joking, his own experiences of becoming a ‘new speaker’ as he retired – discovering new ways of thinking and speaking that have come from changes in his own life. He likened this to the experiences of students on MA TESOL courses that he teaches, learning to become TESOL specialists and to speak, act and write accordingly. This is a process of ‘repertoire extension’: adding new ways of speaking and acting to your existing repertoire.

“Coming out involves a change in what is sayable and what is said.”

In ESOL, he argued, there is a pervasive silence about sexuality and LGBTQI issues – a focus of much of his recent work. The watchfulness, the attention to pronouns and to words like ‘partner’, can be important elements of a person’s repertoire and of how they use it to communicate; likewise, coming out involves an extension of that repertoire to encompass new ways of communicating yourself to others. He developed this idea of ‘repertoire extension’ by discussing some of his work on the TLANG Project, working with Capoeira groups. There, learning the particularly Afro-Portuguese terminology is embedded in group activity and in the culture and concepts of Capoeira.

“How does the the ‘new speaker’ lens apply to people who have no interest in language?”

The final speaker was Celia Roberts, talking about the challenges of engaging with non-academic audiences. She has worked particularly with large medical institutions such as the Royal Colleges, where language is often seen as something that “either doesn’t matter or is a simple matter”. She talked in detail about the job interviews, and particularly about the clinical consultations that many trainee GPs undergo as part of their accreditation. There is often a linguistic penalty for migrants and multilinguals, she argued, that stems from different understandings of language. Multilingual migrants are often seen as ‘context free’ or as having a ‘language problem’ – that is, that they should either perform identically to ‘native speakers’ or that their lack of English acts as a barrier. She gave the example of North Indian prosodic patterns that were misinterpreted in her data as a lack of empathy … but showed that these issues were a fundamental part of the monolingual ideology underpinning the assessment process.

This puts linguists in an awkward position, she suggested. The medics she worked with were often focused on the product – so their first reaction was often in terms of results (are you saying we’re getting the assessment wrong?) or categories (are you saying we’re racist?). This is connected to a category view of languages – either you speak English or you don’t (and if you do, then what’s the problem?). A more sociolinguistic perspective would look at the linguistic and cultural resources that both parties bring to the interview. Language matters, Celia argued, but not in the sense of ‘having’ or ‘not having’ a language. It’s about how you can deploy your linguistic and cultural repertoire to maximum effect.

Our intuitions about this are often misleading. She gave the example of job interviews for low-paid work, an environment in which we often make snap judgements about people (as in any job interview) but in which the class and status relationships of the interviewer and the ‘new speaker’ migrant are often complex. The migrant jobseekers in her data were often better qualified and (picking up on Bernadette O’Rourke’s presentation) stronger users of the standard variety than their interviewers. Those interviewers often reported that they were looking for correctness (someone who could speak English properly), but successful candidates tended to be those who could communicate the ‘messy authenticity’ that spoke to the interviewer.

The round-table was highly theoretical but it was grounded in data collected from around the UK and with a wide range of people. The concepts that emerged – ‘messy authenticity’, ‘repertoire’, ‘new speakers’ as defined by the speakers themselves, ‘entitlement’ – offer a lot to EAL professionals as we engage with rapidly increasing mobility of our students.

The New Speakers network is an international group of academics supported by COST (European Cooperation in Science and Technology). It has  members in 28 countries, working on nine themes (such as language policy, and migration). See more on the project’s website.